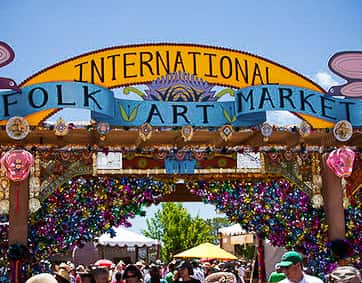 Started in 2004, the annual International Folk Art Market | Santa Fe is held during one weekend of July on Milner Plaza on Museum Hill in Santa Fe, New Mexico. It often is considered the largest folk art market in the world, the mission is to “foster economic and cultural sustainability for folk artists and folk art worldwide and to create intercultural exchange opportunities that unite the peoples of the world.

UNESCO (United Nations Educational, Scientific, and Cultural Organization) was an early sponsor, providing funding for ten artists, followed by an artist-training program in 22 countries. UNESCO has given its Award of Excellence to several products beginning in 2007. In 2009, three booths featured UNESCO award-winning work. In 2008, 97% of the market artists were from developing countries in Africa, Asia, Latin America, Central Asia, and the Middle East.